Alvin is a platform for archiving and publishing digital resources, for digitised physical objects as well as purely digital information. Alvin offers long-term storage of the material, and an attractive platform for publication, including a powerful search engine, persistent identifiers, and permanent URI:s through URN:NBN.

Alvin's metadata is stored in an internal format. The purpose is to be able to describe different types of resources in one and the same system. Descriptive elements are based on international standards for archives (EAD) and libraries (MODS / MADS, MARC), all developed by the American Library of Congress. Some special adaptations for manuscript volumes have also been made according to TEI-MS.

Support for spreading and making the material visible

The website www.alvin-portal.org offers a variety of search inputs for the material. Digital material can be downloaded and used either directly from the web pages or from the specific image viewer.

The digital archive is stored in a database in accordance with Uppsala University's current information security procedures, which are available at https://regler.uu.se/dokument/?contentId=41950.

Import of information to Alvin from other sources is done via the standard XML formats METS and MODS from the Library of Congress. The files must be designed according to the specifications that are corresponding to METS and MODS in Alvin's format manual.

Support for exporting metadata via OAI-PMH in specified format

Assignment of permanent identifiers for records

A URN is a unique and permanent identifier for electronic resources on the Internet. In Alvin, URN:NBN from the Royal Library is used for permanent links to the records.

The system is based on open-source software, mainly:

To this is added a login module and image conversion service that has been developed in-house. Programming is done in Java. JavaServer Faces is used to build the web interfaces. 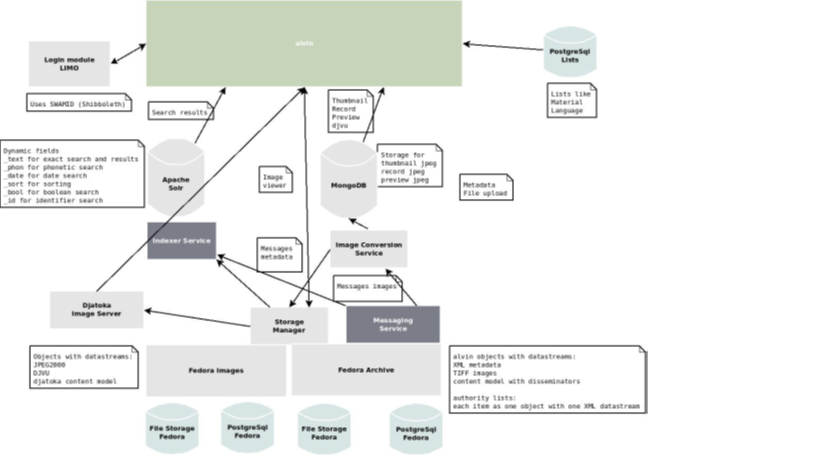